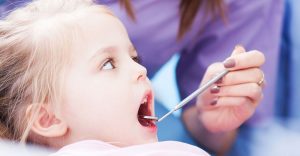 Healthy teeth are key to a healthy childhood; kids need them for chewing, speaking clearly, and having a bright smile. As a parent, you may play an important role in your child’s dental health; in fact, good oral care begins with you.

In our practise your child can watch his or her favourite DVD on the LCD screen with headphones whilst in the chair, to ensure they have the most pleasant experience possible. It is especially important to keep your child enthusiastic and motivated about caring for their teeth, by being a good example yourself and create a consistent and fun environment for tooth brushing. Soon they’ll learn to recognise it as part of their daily routine, just like eating breakfast or reading a bedtime story.

So remember starting early and starting right will ensure that your child’s smile stays healthy and bright.

The aim of root canal treatment is to save a tooth that has been badly damaged due to decay, disease or injury.

Most people prefer to save their teeth because it generally will function better and is stronger than an artificial tooth. Cleaning and maintenance of a natural tooth is also much easier. Problems with biting, chewing and oral health are associated with losing a tooth. For example, nearby teeth can move out of their normal position and tilt into the space left by a missing tooth.

This can make chewing and biting difficult, and can lead to further decay and gum disease around the tilted teeth. Root canal treatment is successful in most cases. If you take good care of the treated tooth, it may last for many years and possibly for the rest of your life.

Your tooth will not be treated unless the treatment is likely to succeed. Root canal treatment may not be appropriate in some cases, and extraction may be the best, or only, option.

Periodontal (gum) disease is the inflammation and infection of the gums. It is caused by plaque, a thick and sticky film of bacteria that builds up on teeth. Plaque can harden to become calculus, also known as tarter. Plaque and calculus are caused by poor oral hygiene, that is, the teeth have not been cleaned thoroughly or often enough.

Gum disease is a painless and slow progressing disease that destroys the bony support of the teeth and because it doesn’t hurt, most patients aren’t aware they have this problem.

Early stages of gum disease: Bacteria in plaque and calculus can damage the gums and cause gingivitis, an inflammation of the gums. Gingivitis can usually be treated successfully by removal of the plaque and calculus, followed by thorough brushing and flossing everyday.

Benefits of treatment: The purpose of periodontal treatment is to stop or slow down the progression of gum disease. Benefits include having a mouth that feels looks and is healthier. Teeth that feel smooth and look clean. A better chance of keeping your teeth for life.

Partial dentures
They act as dental bridges as they “bridge” the gap between a missing tooth and teeth. They are made from metal, acrylic or resin.

Complete (Full) dentures
Replace all of the teeth and their adjacent tissues.

Reasons why patients may require dentures include:

We place special priority with all emergency needs.

Should you experience a dental emergency within business hours, call the practise and we will make every effort to attend to your needs as soon as possible.

If you can not contact us or it is after normal business hours, please call your nearest hospital.

Book an Appointment
Go to Top